More than two years ago, in May 2018, Apple introduced a new concept and API called SKAdNetwork. That API would allow mobile app install attribution while preserving privacy. Back then, many questions were raised about the future of mobile attribution on iOS and the place of SKAdNetwork in it. Still, due to limited capabilities and no real incentive, everything has stayed mostly the same, and SKAdNetwork hasn’t been adopted.

That all changed yesterday when Apple announced their new updates to App Tracking on iOS, manifested in the AppTrackingTransparency framework and their new privacy guidelines. These updates, unsurprisingly, are causing the industry to look into alternatives. One such alternative is SKAdNetwork, which has gone through a silent face-lift at the same time.

Singular has been preparing to utilize SKAdNetwork for a long time, and while we make those plans a reality we get many questions from customers and partners who want to learn more. This is the first post in a blog series that will explore how SKAdNetwork works, what kind of data points it provides, and how it can be used for marketing measurement. In this post, we will try to keep things high level, and in the next one, we will dive deeper into the gritty details.

What is SKAdNetwork and what does it do?

You might be asking yourself how it achieves that and the key to understanding that is that Apple, and as an extension, the App Store itself is serving as a facilitator. The whole attribution process is actually conducted by the App Store and attested by Apple’s servers. It is then disconnected from user identifiers and temporal information and sent off to the network. 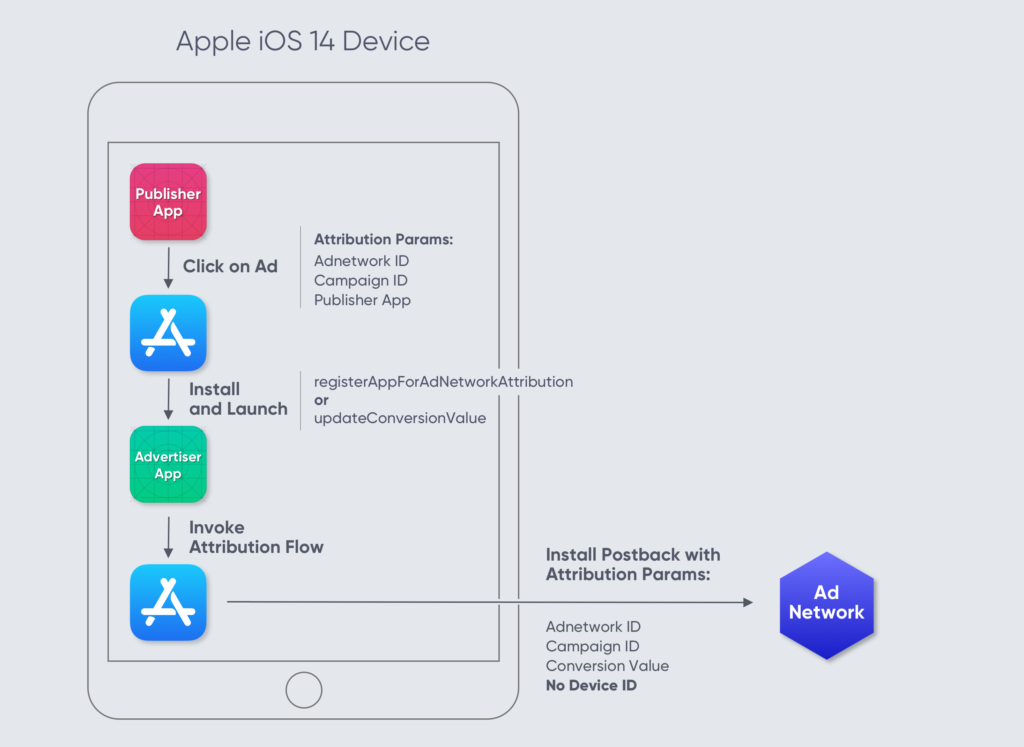 How does it work? Simple… (well, not really, but we will try to simplify it)

When an ad is clicked and the store is opened, the publishing app and the network provide it with some basic information such as network, publisher, and campaign ID. The App Store will then send a notification of successful conversion to the network. It will report the attached values alongside a conversion value that can be reported by the advertised app.

That notification will be sent at least 24 hours after the first launch and will be devoid of any device or user identifying information. Additionally, the App Store conducts the process so the advertised app has no knowledge of the original ad and publisher.  In such a way, the network receives an attestation that an install has happened, without tying the install to a specific user, thus preserving privacy.

What to expect when using SKAdNetwork install attribution

First, let’s cover what you get:

Now, to what you don’t get:

Getting the most out of SKAdNetwork as the Advertiser

As an advertiser, you must be asking yourself what’s the best way to utilize this new mechanism that Apple has created. Here’s a short checklist of the must-haves:

Measurement Partners are well-positioned to support this whole process, starting with media partner integrations and assuming the central role in verification, analytics, and reporting. Here at Singular, we have already announced a solution for implementing SKAdNetwork, and the above are the foundations we will be building into that solution. We expect others to follow us on this path.

Interestingly, we see this move as a natural progression of Singular’s product. Singular’s unique position and unique integrations with media partners allow us to make the most out of this new API and enable our customers a fluid, seamless transition into this new age. We will work tirelessly to make sure our customers can utilize all the tools that are available to them.

This article is the first part in a series of articles discussing SKAdNetwork specifics. The next one will take a deeper dive into the mechanisms behind this API. Sign up to follow our blog below!