Google has caused a big stir in the world of web analytics with the announcement Google App + Web properties.

Google Analtyics 4 (previously App + Web) is a completely new platform with a separate underlying architecture that promises to take web analytics to the next level, rather than an update to, or feature of, Google’s existing ‘Universal Analytics’.

In this article, we will highlight the key developments of GA4, how it differs from Google Analytics, and an overview of how the platform can be used.

Why do we need a new analytics platform?

When Google updated GA to Universal Analytics in 2013, it introduced the ability to track apps in analytics by installing SDK or GTM SDK.

However, the web-first architecture combined with the way it deals with visitor identifiers means that, even with this update, GA still did not provide mobile app analytics with the unique requirements needed.

As a result, since 2016 Google has been pushing Google Analytics for Firebase as their recommended and primary method to track app traffic. While this app-first platform provides reporting and metrics more relevant to the app, it left a large hole in the ability to join app data and reports with that of the website.

This is where the new recent announcements from Google brings things back together again. GA4 properties is an extension of the Firebase framework and architecture which allows tracking from the website as well as from your apps.

Why you should be excited about Google Analytics 4 properties

This move by Google is a significant and bold one; given the number of websites out there that have spent a lot of effort and time implementing the current Universal Analytics, the introduction of GA4b will impact a lot of businesses.

Despite this, there are a number of features of Google Analytics 4 that will benefit businesses that we feel people should be excited for.

While Universal Analytics has the userID functionality that lets you report to an extent across platform/device, it has some significant flaws:

Within Google Analytics 4 properties, Google has introduced the concept of ‘streams’. You can now create multiple streams of data within the same underlying dataset/property; these streams represent your different applications, so you could create separate streams for your website, iOS app, and android app. Eventually, we expect other applications perhaps such as point of sale software or CRM to be available (although the functionality is not there to do this just yet, unless of course, those applications run Firebase).

With GA4 properties, there are only two concepts to grasp: users and events. Rather than collecting data on sessions and hits within each session (like in Universal Analytics), Google Analytics 4 collects and records events, each of which can have up to 25 custom-named parameters associated with it. This is a much simpler architecture that will be simpler to understand, plan, document and implement.

One final benefit to the new architecture is the greater ability to customize, rather than having to shoehorn all events into the Event Category/Action/Label/Value framework that Universal Analytics provides.

Google Analytics 4’s simple architecture means simpler reporting and more flexibility than reporting in Universal Analytics. Interpreting and analyzing the tracked data should also be easier than in GA.

Additionally, the more streamlined dataset should allow for quicker access to the data, and Google has promised that the new framework will provide lightning speed return of data to reports, and a level up from what is currently available in Universal Analytics.

One big selling point of the new GA4 properties is that you get access to the ‘Advanced Analysis’ tool, which has historically only been available to Google 360 customers. This is a very powerful exploratory environment in which you can produce reports, visualizations, pivot tables, custom funnels, segment overlap and path analysis reports. 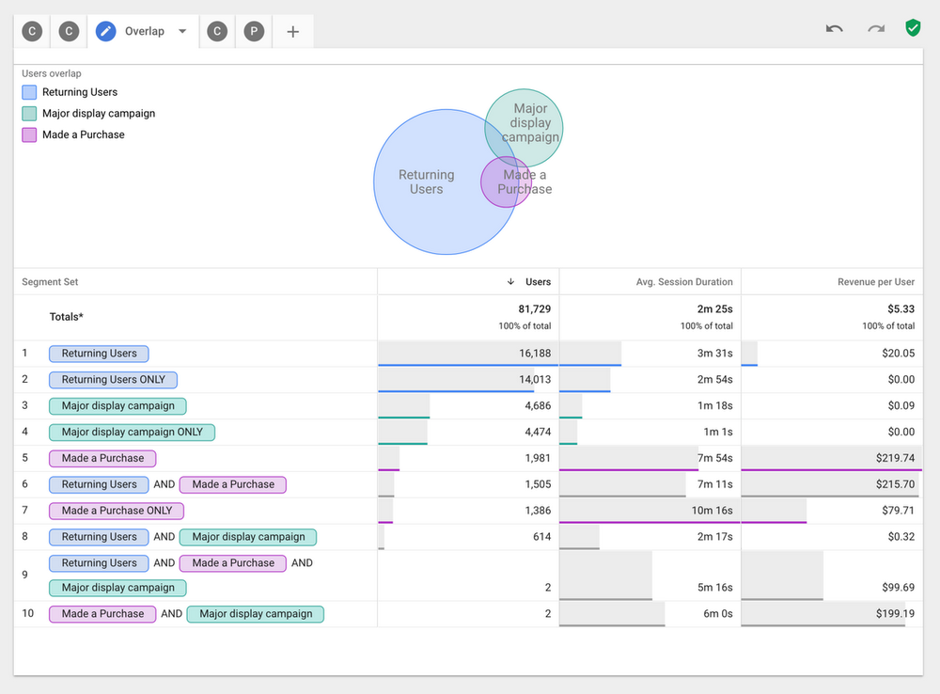 Google Analytics 4 gives users the facility to set up and export all web and app data directly into BigQuery. This hit level data opens a whole host of opportunities, which were previously only available to GA360 customers. Some of the benefits of having your data in BigQuery include:

As the world of data and analytics evolves, we are seeing more companies create data warehouses where they can hold multiple sources of data together, enabling them to remove silos and analyze and report on data more accurately. Being able to include web and app data within these data warehouses offers great potential to the entire industry, not just those large enterprises that are paying for the paid tool.

Those that have had Firebase installed in their apps for a while will know that by simply installing the SDK, Firebase will automatically start to track a set of useful events out of the box without the need to implement any further code. Some examples of events which are tracked in Google Analytics 4 include screen_view, session_start, app_update and first_open. A full list of events can be found here.

To get the full benefit, you will need to plan and code specific events for your particular app within the app. 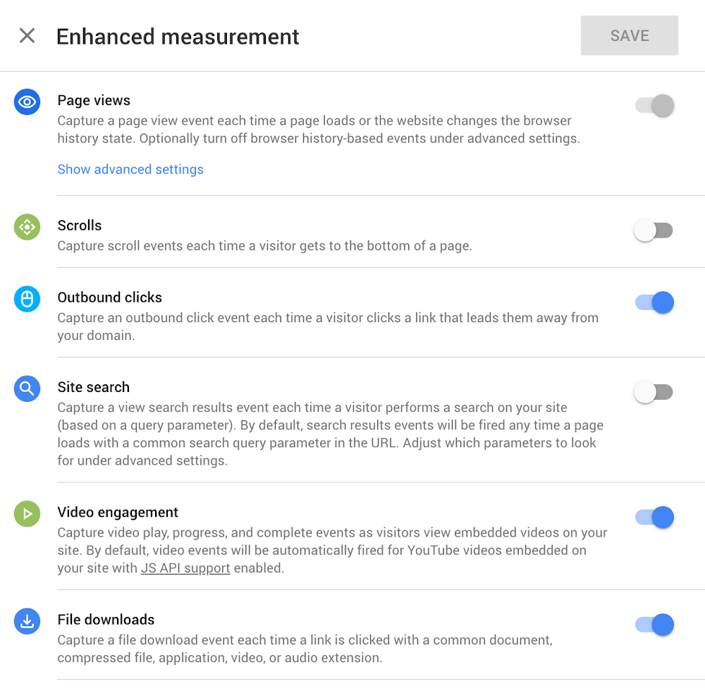 We’ve already mentioned the fact that the new Google Analytics 4 properties uses a simpler event-based model, but wanted to detail this further by highlighting a key difference between the underlying data schema of GA4 and Universal Analytics. 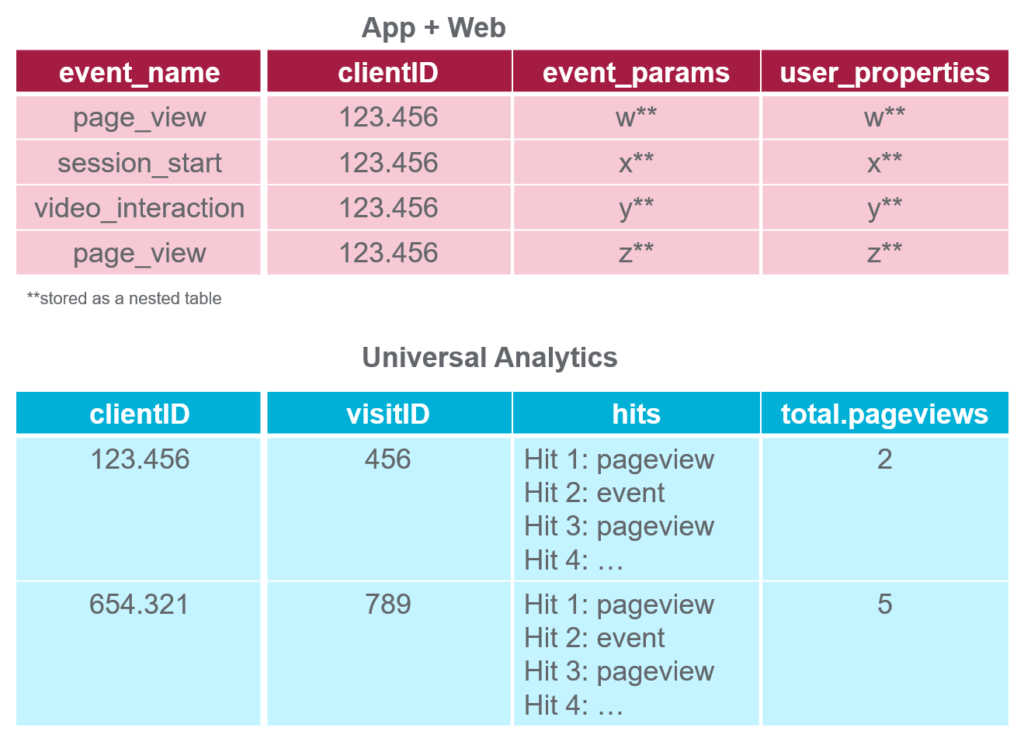 Note – the full schemas can be viewed here and here.

With GA4 properties, the schema is just a flat table of events. Sessions are still represented by an auto event called session_start but these are an event, just like any other. It waits to be seen if Google introduces any sessionization logic, to sum up, and represent the aggregated session data. This flatter simpler data schema gives several benefits:

The key concepts that makeup Google Analytics 4 implementation are discussed below.

Events, unsurprisingly, track events. For each event you want to track, simply give it an event name and set a tag to track it. Web + App allows up to 500 different event names per GA4 property, although it is wise to execute a well-planned approach to using these.

There are some limitations, however; each project or property has a limit of 100 custom parameters (50 text and 50 numerical), and every parameter you register against an event counts even if it is the same parameter. For example, if you created a parameter called ‘state’ and registered it against 50 different events then this would use your entire quota of 50- textual parameters for the project, which means users need to carefully plan how events are set up to conserve this quota.

This is a clear limitation, and if Google create a premium version of Google Analytics 4 it is likely that the limits would be significantly raised.

User properties are essentially the equivalent of user scoped custom dimensions in Universal Analytics. For each project/property, you are allowed 25 user properties and they are intended to store longer-term data that describes that particular user: for example, ‘registeredUser’. Once you set a user property in a device, that value will be set against all future events until the value is altered or unset.

While Web + App is an exciting development with huge potential for the world of analytics, it is still in beta and is fairly bare in terms of functionality. Until this point, Google has focused on the underlying framework of the platform and while they will be concentrating hard on adding all of the features and functionality you are used to with the current version of Google Analytics, it is far from ready to be classed as an enterprise tool in its current state.

We expect GA4 to rapidly develop over the next couple of years, eventually taking over from Universal Analytics. As this happens, we will see new and improved features to appear as Google becomes ready to take Google Analytics 4 out of beta and declare it as their primary analytics tool.

Google hasn’t declared a timeline or an explicit list of what they will be adding, but our guess is that these features will include:

What should you do now?

With App + Web still in beta (launched in October 2020 as Google Analytics 4), you may not want to implement it as your primary reporting tool just yet. However, it makes sense to start implementing the tool as soon as possible so that, when App + Web becomes the primary analytics (or if you make the move beforehand), you have as much historical analytics data as possible so you are ready to hit the ground running.

Google Analytics 4 can be run parallel with the current version of Google Analytics, which means it can be set up and left on in the background. We will be writing a separate post detailing the process you should go through to set up GA4, but the main take away is that it isn’t very hard to implement, at a basic level at least, and the sooner it is set up, the more it will benefit your business in the future.